Gregg Robinson speaks on the economic growth of Florence County 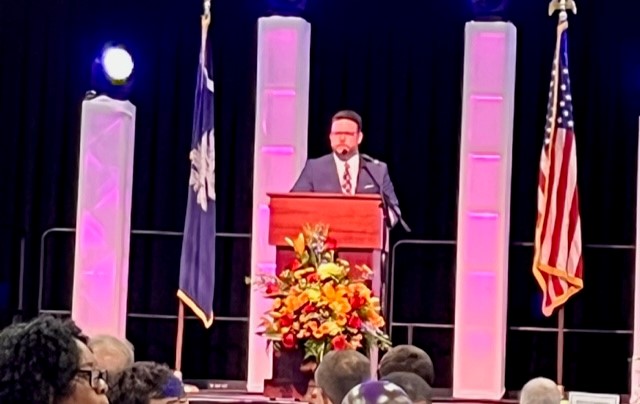 Robinson was the speaker at Wednesday's annual luncheon of the Greater Florence Chamber of Commerce and reflected on his first 70 days on the job. He noted qualities about Florence County that would attract manufacturers, and communicated ways to recruit new businesses and shared the master plan for five new industrial parks.

Robinson, who has nearly 30 years of experience in economic development, started off his speech highlighting the growth Florence County has experienced and credited its growth to the visionaries who saw a vision for Florence County and worked toward it.

“Florence is standing on the back of a lot of visionaries,” Robinson said. “It is about cathedral thinking and building blocks for the future generation to stand on. Even knowing that we will never see the chapel finished. It is always about creating that foundation of success.”

Robinson said he observed that family is the core in Florence County.

Robinson said the leadership in Florence was phenomenal and the legislative delegation had the ability to deliver and handle every infrastructure need Florence has.

Robinson said the private sector partnering with the governmental side is what sets Florence apart in the Eastern Region and the community will grow as a result.

The educational opportunities that are present in Florence County have the ability to attract high quality businesses to the area.

Robinson said he was blown away by the work that is being done by Fred Carter at Francis Marion University, how Jermaine Ford is working to prepare students to enter the technical workforce, and how Superintendent Richard O’Malley and other superintendents all over Florence County are preparing children in grade school to be competent and bridge the gap to educate the next level executives.

Robinson said bridging the gap was important when it came to scientific investments.

Robinson said the partnership Florence has between the city and county is unlike any he has seen in the state and he has been doing economic development for almost 30 years.

The medical presence is the cornerstone of Florence County and is what the city is known for. What a tremendous hub we have, Robinson said.

“If that’s not what we’re known for as far as the medical presence we have with not only McLeod, MUSC, and HopeHealth, but the ability for us to market that across the country.”

Robinson said the next step is to target how Florence becomes the manufacturing hub as well.

It’s about the bones of economic development, Robinson said. He used the anatomy of the human body – playing on the medical presence that Florence County has.

After noting the positive qualities that attract new businesses to Florence, Robinson began talking about the work to come within his first 90 days. He started with separating the difference between partnership and progress, which he said was often confused.

Robinson said in his first 90 days we have to listen, be flexible, but most importantly have faith in each other. Robinson also communicated what will be done on the government side and the next steps the county council will take and the investments Florence County is going to make.

Robinson said in order for a community to grow economically infrastructure is key.

“Everyone has property,” Robinson said. “But does it have water, sewer, gas, and electricity?” Robinson said a friend told him if you want to be #1 in economic development, you have to be able to handle #2 and he said without being able to handle the second statement, you can’t move forward in a lot of construction.

Robinson said it is called Derived externalities, the spinoff that small businesses benefit from which he said was key to economic development.

“We have to work with our four year institutions,” Robinson said. “Our 2 year institutions, and figure out how we can develop programs to teach students from as early as the 6th grade the fundamentals of the technical system.”

Robinson talked about a $22 million bond that was passed by county council in 2020 and said he wanted to make sure the money was distributed across the county in the best way possible.

He went on to talk about site requirements for economic development. He said Florence checked all of the boxes for a manufacturer wanting to move a company there. Florence has the labor, quality of life, and is making sure that its downtown is beautiful and that revitalization efforts were maintained.

Robinson said he wants to get all of the municipalities to work together to cultivate an industrial park in Scranton, Lake City, and Pamplico so individuals can find their next job and be successful without having to travel 40 to 50 minutes every day for work.

Existing industries are vital to prospective industries because they look at what is already established to judge how their company will grow. A testimonial video was shown by Thermo-fisher Scientific, a company in Florence with over 130,000 employees and how its impact has been felt in the community and by those who are employed.

Robinson said videos like that allow Florence to be able to target the next scientific company and allows Florence County to showcase what it can do for the world.

Robinson spoke on the industrial development to come in the county. Five new industrial parks are coming to Florence and they are either utility-owned or county-owned. Robinson said the properties must be planned according to zoning and utilities so they can be built.